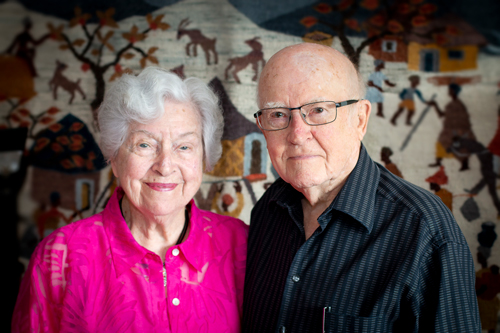 Dr. Etcyl and Ruth Blair are one of our dynamic couples living here at Beacon Hill at Eastgate. They sat with us to share their amazing life journey in a personal interview in their lovely apartment. From the moment they invited us into their home, we were surrounded by culture. The walls were adorned with art from local artists throughout Asia and Africa. A huge library of music was lit by a large picture window, and an impressive sound system (designed and built by their son!) faced modern and comfortable furnishings. Across the entire home, we saw unique treasures from all across the globe, and a book of over 20 patents issued to Etcyl for his work at Dow. This couple has seen and done just about everything: from guest-conducting the Midland Symphony Orchestra, to giving talks at the University in Kenya. Now, settled in at Beacon Hill, with family coming by to visit often, Etcyl and Ruth take advantage of all that Beacon Hill has to offer. Read on to hear about all their adventures in their own words.

Etcyl introduces himself as he and Ruth sit in their living room, “I’m originally from Oklahoma… born in 1922, but later my family moved to Winfield, Kansas, which is where I met Ruth.  Everybody calls me by my first name.  Etcyl, E-T-C-Y-L.  Rhymes with “pretzel.” If you say “Edsel,” well, that old car doesn’t run anymore, but this 1922 “Etcyl” still runs pretty well. Especially considering I’m 97 (wink).”

Ruth goes on to describe growing up during the Great Depression, “My father was a chiropractor, and growing up in northwest Kansas, our living room doubled as his reception room. So, I learned how to clean the house—back in the dust bowl days—without a vacuum. First time I saw one, I had no idea how to even turn it on, but now I don’t know how I got along without one.

There are three things about Etcyl’s childhood that I think had a great impact on him.  One was that he learned to play the violin when he was eight. He’s loved music ever since. Second, he delivered newspapers on a bicycle to help the family, and has earned everything he’s owned. Third, he had to run back and forth from school each day for lunch. Winfield had no school buses then. That early running discipline has helped keep him fit. To this day he’s healthy and not on any medication.

It All Started in History Class 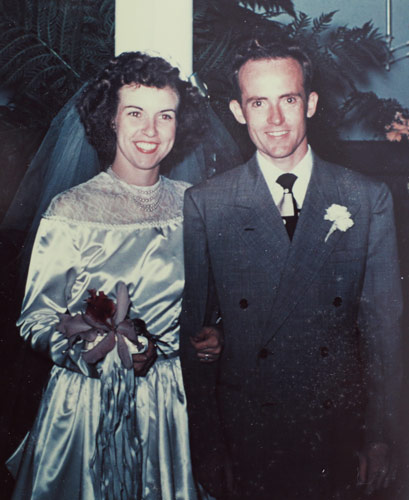 Etcyl describes the start of their love story, “We met at college in History class. I had just come back from the service, and Ruth was a senior in college. After we graduated, which was in 1947, I stayed on at the college and taught for a year and a half before going to graduate school at Kansas State University, where I got my M.S. and Ph.D. in chemistry.

Meanwhile, Ruth was planning to become a director of Christian education. She went to Southwestern to prepare, but I asked her to marry me and she switched her emphasis to homemaking. My gain. We now have three amazing sons. I owe an incredible gratitude to Ruth for helping to raise them all so well.

The oldest, David, is a medical doctor here in Grand Rapids, which is partly how we ended up here at Beacon Hill… but I’ll talk about that shortly. Ronald, our middle son now retired, was a Director of Financial Forecasting and Planning for Consumer’s Energy in Jackson. He and his wife, Sandy, run a bed and breakfast south of Jackson. Our third son, Kevin, is on the staff at Western Michigan University with a Ph.D. and two post-doctorates.”

“Despite my keen interest in aviation and having a pilot’s license, I was not allowed to pursue flying in the military (WWII) because of colorblindness. I was assigned to Ft. Detrick, MD, to work in bacteriological warfare.

Afterwards, I decided to make science my career, completed my college studies, and applied for work at Dow Chemical Co. in Midland, MI.

I had filled out on the application that I liked to play violin in an orchestra, so they took me to the Dow Symphony Orchestra office. They had their own orchestra! I decided that Dow was the place to go. I also liked that it was a small town like the one I grew up in. Little did we know that Dow would become the largest chemical company in the world. 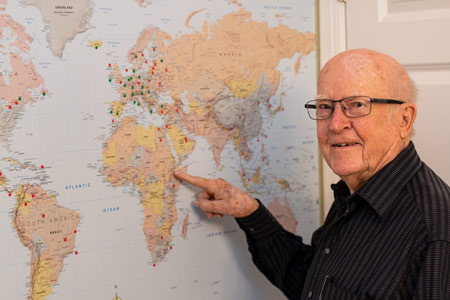 After many years, I was asked to lead research for the agricultural department and oversee the global agricultural products for Dow. That position took me around the world, which is how Ruth and I caught our “travel bug.” I used to take Ruth on a trip every year. About the only places we haven’t been to are India and Antarctica. While our kids were growing up, we drove around the United States, pulling our little camping trailer. After I retired, we continued to travel a lot. Our kids travel now, too, which brings me back to how we arrived here.”

Ruth shares about their choice to move to Beacon Hill, “When Etcyl and I hit our 90’s, our son, who lived in Grand Rapids, found he was traveling over two hours to see us in Midland more and more often. He’s the one who asked us if we’d consider moving to this area. At first, we looked around Midland for a retirement community, but they didn’t have the amenities we were looking for and it still kept us far from our family. We had heard about Holland Home, but after visiting it, felt it was too large and impersonal there. Then we came over here to Beacon Hill.

From the moment we walked in the front door, we felt welcome. First of all, there’s the young lady or man who sits at the desk and greets you. Beyond that, wherever we went, from the people to the atmosphere, it was all inviting. We imagined that moving here meant we would lose the kind of intimacy we had with our friends before, because we had something in common with them. They were people who went to the same church or worked at the same company. Surprisingly, the people here have been unexpectedly genuine and friendly.”

Activities for Every Occasion

Etcyl appreciates the activities at Beacon Hill, especially the music, “We’ve been here more than four years now. Since we’ve come, there’s been many wonderful additions. The auditorium and the garden café were the most recently built. There’s so much we love to do! Exercise class on Mondays and Thursdays, swimming on Tuesdays, and hiking class. Plus, regular trips to the symphony. Often, I have been able to share music from my collection of classical DVDs in the auditorium. Sometimes the programs include selections being played at the next Grand Rapids Symphony concert. This is nice for those residents who can’t go to DeVos Hall and serves as an introduction for those who can.

There’s truly more taking place that you can possibly attend or be a part of. With so many kinds of speakers presenting, and so many wonderful things to do, you have to select what it is you’re most interested in. No one can possibly do them all. We’re very active and involved here. Ruth and I love being part of this community. Our family enjoys it here, too. 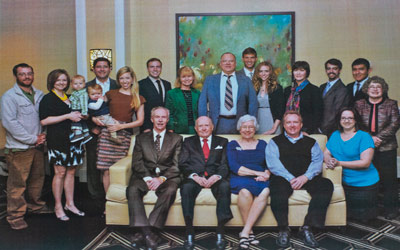 We have some of our family over at least once a week to eat. Our four great-grandchildren are a big kick. Two are almost eight and two are four and a half. They all like to run down the hall. Sometimes we wish we had a lasso.

Two of our granddaughters and their mother, and two great grandkids came for lunch just the other day. They all know how to swim. So, maybe this winter we’ll have them over to swim in the aquatic center. Sometimes, we have the entire family over. Everyone likes visiting us here.

As Fine as Cherry Pie

I haven’t even talked dining opportunities. It seems as if Beacon Hill has as many choices for dining as for activities. But I still say nothing beats Ruth’s cherry pie. Back when we were dating, I told my mother about this girl I had met in college and how she made a really good cherry pie. My mother told me to head back to see her since I was talking about her so much, and if I was lucky, she might offer me another piece of pie.

We ended up with a cherry tree right in our backyard in Midland. We used to freeze the cherries for Ruth’s pies. All three of the boys learned how to pit cherries with a hair pin.

We have just celebrated our 70th wedding anniversary. And, yes, she made a cherry pie which we shared with two other Beacon Hill couples from our floor who have also celebrated 70 years recently.” 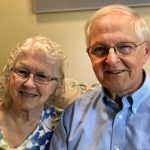 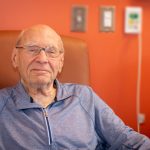