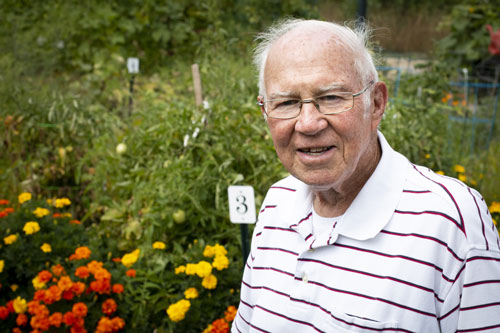 For Carl, the dividing line between family and friends is a little blurry. It seems everyone becomes family. He and his late wife, Glenda, lived just two blocks from Beacon Hill for nearly 50 years. When Carl dropped by his house just a few weeks after moving to Beacon Hill, neighborhood kids swarmed his car, calling, “Mr. Welmers, we miss you!”

This natural camaraderie with neighbors stretches back to his childhood here in Grand Rapids. When he was 13, Carl started a lawn service—mowing, trimming, shoveling snow. He paid for his college from all the work he did, but “what’s amazing,” he says, “is the friendships I grew from those people.”

In fact, he eventually married into one of their families! He and Glenda wouldn’t actually meet until they attended Calvin College together, but one of those neighborhood customers that Carl had shoveled snow for as a child was Glenda’s 100-year-old grandmother.

His immediate family is a primary example of embracing others. Daughter Kara and son Jeffry were adopted as infants when they were just a few weeks old. Carl’s continuing pride and delight in each of them is evident. His daughter, a nurse like her mother, lives just two blocks away and is able to visit often. And his 16-year-old grandson gets driving practice by taking Carl to appointments.

That lawn-mowing job was also the foundation of a life-long love of nature. In fact, Carl is a certified master gardener. We interviewed him in his current “natural habitat”—Beacon Hill’s community garden! “It’s in the genes,” Carl explains, noting that his uncle was also a master gardener as well as president of the Kent County League and of the Bulb Society. “He always wore a flower from the garden to church,” Carl remembers. “You could always pick him out because he had a carnation or a pansy or a tulip. That was his trademark.”

“I’m not that way, but I picked up some genes, I think. It’s nice to make little arrangements for people. Sometimes—we had a couple of people that had been quite sick—you just come out and clip, and you’ve got a nice little arrangement for them. I guess you could say that “it’s in my blood.” 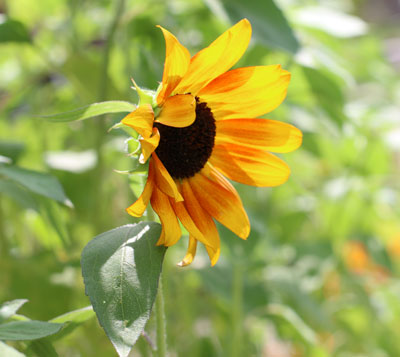 True to form, when Carl surveys the BHE garden, he doesn’t brag about his own plot, which is full of healthy vegetables and lovely flowers, especially sunflowers. Instead, he points to plots that belong to other residents. “See this beautiful arrangement here? . . .”

Another of Carl’s lifelong interests is travel. Though he’s lived his whole life “within two miles from here,” he’s always traveled—first to lakes in the area with his parents and sister as a child, then further and further afield as an adult.

Before he and Glenda had children, they visited several Midwest and New England churches where Glenda’s father was a pastor. After they had raised their children and retired, they began taking international trips with four other couples for weeks at a time—to Spain and Portugal, Mexico, the Canadian Rockies, Germany, Austria, Switzerland, and the Netherlands.

One trip was particularly memorable. Carl and Glenda toured Wales and England for a week with another couple on “narrow boats.” “The narrow boats are six feet wide and 65 feet long, like a pencil,” Carl explains. “We did two and two on each of two boats—two couples. You do all your own cooking and you do all your own portages” [carrying your boat across land from one canal to another]. “You have to find your way around—and get your way back! That was a real fun trip.”

Getting to Know Beacon Hill

Carl came to live at Beacon Hill in October of 2018. Glenda had died in September of 2017, a few weeks after hip surgery following a 2½-year battle with cancer. Before she had come to Beacon Hill for rehab, they knew her case was terminal. “I was putting her to bed one night,” Carl remembers, “and she said, ‘Say, Hon, when I’m gone, you might want to get your name on the list here. It’s a wonderful place. They’ve taken wonderful care of me.’ Wasn’t that a nice tribute to Beacon Hill?”

The next year, Carl stayed in Beacon Hill’s rehab wing himself after surgery. So, with two positive experiences here already, he joined the waiting list for an apartment in independent living. Though there were 130 people ahead of him when he signed up in early 2018, an apartment that his children agreed was “definitely the apartment for you,” came available in October, so he moved in.

“And it’s been a great place,” he reports. “To say I miss my home—I do. I miss my neighbors. And we were 48 years in our home. We were the grandpa and grandma of the block when it came time. So, when I sold the house, that was a parting of a lot of memories…”

Carl doesn’t dwell on loss or have unrealistic expectations of the present. “Here, you don’t make the longstanding friends that you do in your home. But one thing they do here is that you get an assignment every night for dinner—and as you know, the dinners are wonderful—so, I mix with different people every single night. That way, you get to know them and what their aches and pains are, and what their family situations are, and what brought them here.”

That’s also how Carl got involved in some of the activities at Beacon Hill. “I was kind of bored at first,” he admits, “because the nights are long. And then somebody said, ‘Oh, we have a cribbage group.’ You know, you pick up little bits each time, depending who you talk to at the dining room table. They’ll say, ‘Oh, there was a choir last November, and kind of a musical.’ And somebody says, ‘Hey, join us.’”

Now, Carl is very active. “I sign up for everything that’s going to enrich,” he says. “They’ll take us to the symphony and the Circle Theater downtown and the boat cruises on Reed’s Lake. And there’s a big auditorium, and they have guest speakers in the fall and spring. Oh, and just around the corner of this big auditorium, they had a big, big Easter egg hunt roll for the East Gate neighbors. I think there were 85 kids, but there were over 200 when you counted the parents. Man, they do a lot for families here and for children.”

You can tell Carl loves children. “At Christmastime—listen to this one!—one morning around Christmas, I bumped into a friend and I said, ‘Adele, it was sure good to see your grandkids here last night.’ ‘Oh, Bud,’ she said, ‘those weren’t my grandkids. They’re people from our church. We’d have had them over to our apartment, but we haven’t got the room.’ So, she asked Beacon Hill what they could do. They said, ‘bring the kids’ swimsuits. They can swim for a half hour.’ Then they had the Polar Express movie that’s written by Chris Van Allsburg from East Grand Rapids, and they showed that in the lobby. And they said, ‘tell us how many are coming and we’ll have cookies. The kids can decorate cookies.’ Now, that is a memory for kids!”

“There’s another example from across the street. I was going out one day—I guess it would be Christmastime. And when you come in the front door, there’s that first auditorium room there. You see a big grand piano. Every Friday afternoon at four o’clock, when the kids get out of school, they come running across the street. And they have an hour of piano—of musical instruments—with one of the neighborhood’s musicians. What a neat thing for the kids.”

Carl sees God’s hand in his life across the years, including his decision not to move away from Grand Rapids years ago.

“I was with a major trucking firm for 28 years. When they moved their headquarters to Denver, I decided to stay here. It was right at the end of 1982, when the recession was taking place. I became a controller for a company that’s about three miles from here.” One big advantage was his kids finishing their education here. “There’s the providence of God. We see that in a lot of everyday life.”

He saw it again when he moved to Beacon Hill in 2018. “The way that everything worked and the way that all came together? It’s a God plan, I’ll tell you! No question about it, so—just from the fact that my name was picked out of 130 in six months.”

He enjoys the solid community life here, and the emphasis on faith. “That’s very much pronounced here. They respect all faiths. And on top of that, they have a full-time chaplain. I had a good long talk with him soon after I moved here.” The spiritual emphasis is evident to Carl on an ongoing basis. “We have Bible Study every Wednesday morning at ten o’clock for people who want that as part of their stay here.”

Since his last surgery, Carl hasn’t been driving long distances. “I can drive to church, and I can do things like that. But we have a trailer up on Lake Michigan.” So Carl makes that trip with his 16-year-old grandson as his chauffeur. “I let him drive to the lake, and he does very well.”

One night, Carl was sitting in the lobby with some visiting friends. “We were sitting by the fireplace and I said, ‘Oh, I’m going to miss my grandson come September. He takes me to all my medical appointments.’ And somebody just a couple seats away heard me say that. They came over and said, ‘You don’t have to worry about your grandson not being here. Beacon Hill will take you to any of your medical appointments and pick you up.’ So, I’ve used that a lot.”

Living in a Cadillac

It’s just one more thing that confirms his choice to move to Beacon Hill.

“When I talk with people from church or with someone I’m sitting next to at the symphony, and they ask, ‘Oh, where are you at?’ I tell them I live at Beacon Hill at Eastgate. ‘Oh, you’re at Beacon Hill? Oh, the Cadillac of homes!’”

“The word is out there!” 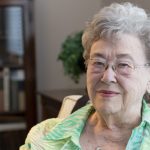