Harriet Nelson on Beacon Hill:
“I’ve Loved Every Minute of It” 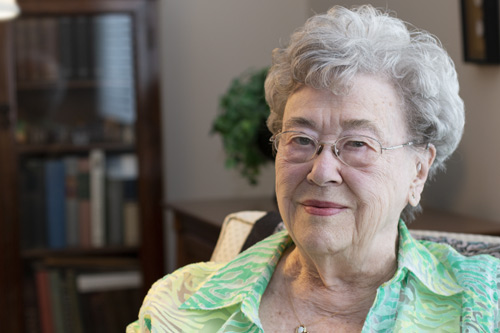 Harriet Nelson isn’t Beacon Hill at Eastgate’s oldest resident by age, but she is by tenure! In just a few months, Beacon Hill will celebrate the 10th anniversary of our Independent Living community.  Harriet was the first to move in to the community when the A and B wings opened in November of 2010.

Reflecting on her first 10 years here, Harriet declares, “I’ve loved every minute of it!”

“I heard about Beacon Hill from friends who had already signed up,” she explains.  “I got to thinking: I’m soon to be 85, I better think about it.  And I never looked at another place.  I just knew Beacon Hill was for me.”

It was a natural fit.  “I lived in the neighborhood, just a half a mile from here.  And I knew about 20 of the original people that were moving in.  So, it would still be my own neighborhood.  There was no question.  As for being the first—somebody had to do it,” she laughs.

“I stayed in Grand Rapids because my friends were all here.  None of my children live here.  My husband was gone.  And now most of my old friends are gone, but I have lots of new friends here—lovely people and good friends.”

Harriet was born and raised here in Grand Rapids. She’s lived in Grand Rapids her whole life, with the exception of a couple of years travelling with her husband when he was a Public Health Service dental intern, serving the Coast Guard in Chicago, Washington and Honolulu.

“After U of M, I came back to Grand Rapids and, for three years, taught 7th and 8th grade English at South High School.  I had graduated from South High School just four years before, so I wasn’t much older than the students.”

The next milestone was just around the corner.  “Then, we were married,” she says.

The “we” was Harriet and Raymond. The two had attended the same church growing up, but didn’t meet until they went to the same Sunday School picnic after he returned from World War II, where he had served in the Navy. They wed in 1950. After the stint with the U.S. Public Health Service, Raymond opened a dental office in Grand Rapids. He and Harriet were married for 49 years and raised three children.

Like Harriet (graduated in 1947) and Raymond (graduated in 1950), two of their children are Michigan grads, and one went to Michigan State. “Just about everybody in my family goes to U of M,” Harriet says.  Harriet is also a proud grandmother, with four grandchildren, ages 22 and up.

Despite living steadily in Grand Rapids, travel was a big part of their family life.  “When we vacationed, we camped a lot,” remembers Harriet.  “We bought property up on Beaver Island and tent-camped there.  Then we had a travel trailer and took lots of trips together, including driving to California.  And then, we finally built a cabin.  My husband and my brother and my son built it.  They spent two weeks putting up the shell, and then, over a period of several years, we finished it.” 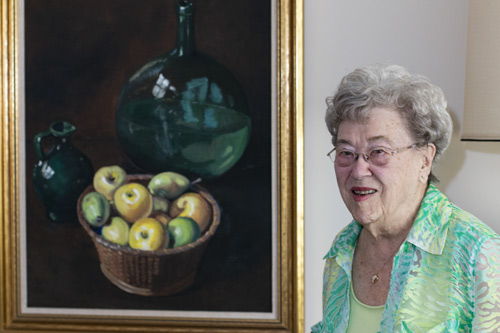 Harriet’s Beacon Hill apartment is appointed with numerous, lovely keepsakes, including a bookcase crafted by her father, pictures painted by her husband, and furniture and decorations they bought together over the years, including a wall clock that “chimes” the hours with birdcalls.

Was making the move from a house to an apartment at Beacon Hill hard for Harriet?

“No.  No.  I knew it was time, and I just did it,” she says.  “I surprised my children.  I just told them one day I was going to move to a retirement home. And this is not an ‘old folks’ home.’  It’s a retirement home.  There can be a big difference between the two.”

Community life here is a big part of that difference. “I’m busy all the time,” Harriet says.  “I play bridge Sunday nights with the couples and Tuesday afternoons with the ladies. And, for a while, I went next door on Mondays to play bridge with a friend (now deceased) who could not see, hear, or talk well…but she loved to play bridge!”

“And I read,” she continues.  “I’ve got my iPad.  I cross stitch.  I do puzzles—jigsaw puzzles and Sudoku puzzles.  I’m very happy.”

“I used to go on the outings, too,” she adds.  “I never missed one.  But it’s harder—I can’t get around as well.  But I do keep busy.  I go to the exercise classes every Monday and Thursday, twice a week.  They’re good and helpful.  And very popular with the residents.”

“Don’t Even Bother to Look Elsewhere”

What is Harriet’s advice to someone considering moving to Beacon Hill? “Don’t even bother to look elsewhere.  This is it!  It’s just a great place to live.” 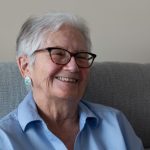 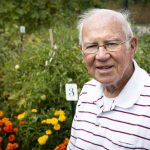