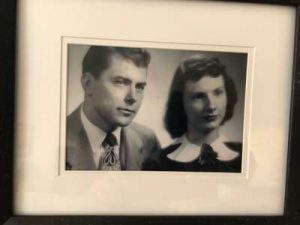 Raymond and Lillian Fuller have always found just the right home in their many moves together. They married while she was in college in Minneapolis and he was in medical school at Ohio State University. “When she came home for Christmas break one year,” Ray recounts, “we decided to never be without each other, and we made arrangements to be married in Minnesota during my Spring Break.” Now, some 70 years later, they are still together. They have lived at Beacon Hill at Eastgate since October, 2014. Lillian is in the Memory Care residence and Ray has an independent living apartment.

Ray and Lillian changed residences several times over the years as he pursued his training and career in medicine. They eventually settled in Grand Rapids in 1960. Ray worked as a cardiologist out of Blodgett Hospital in a practice that became West Michigan Heart until he retired 20 years ago (then continued to volunteer at a free clinic). Even though he’s been in Michigan all of this time, he remains a loyal Buckeye fan.

At 90, Ray looks back on a full life of service:  raising a family (he and Lillian have 5 children, 16 grandchildren, and 9 great-grandchildren, 44 people total in the family counting the married grandchildren) and treating thousands of patients across western Michigan as a cardiologist.

He is especially thankful for Lillian. 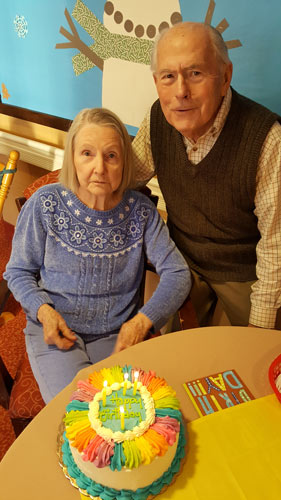 “My wife is quite a woman. As a 19-year-old gal she was secretary to the Dean of the College of Pharmacy,” Ray brags. She taught Sunday School and worked at a pregnancy help center into her 70s.  And, of course, she raised five children. And, as a grandmother, she always went to help when the grandchildren were born—even flying to Japan in 1995 when one son was stationed there as a Navy pilot.

I’ll put a picture of her on Facebook, and I get all kinds of people—from California and all over the states—who respond to the picture. I had so many people say so many things that I didn’t know or don’t remember. One lady who had Lupus said Lillian would come over and do her housework. And then another woman…she and her husband had a fight one night and he walked out…and Lillian came over and stayed with her all night.”

But it was on one of those trips, in 2006, that Ray noticed a change in Lillian. “She was o.k. but easily got confused and disoriented. I thought, ‘Boy, it’s a good thing we’re with a group, because if something happened to me, she’d be lost.’”

On their return, Lillian remained active, but the memory loss progressed. Eventually, she was diagnosed with Alzheimer’s Dementia. Ray took care of her at home for several years, but it gradually got to be too much to handle alone. In 2014, their children convinced him that he couldn’t keep doing this 24/7 and needed to find a place to live where he and Lillian could receive more support. 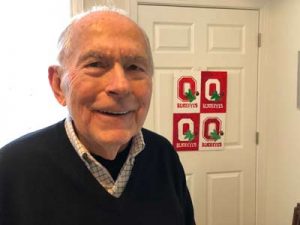 Ray and Lillian moved to Beacon Hill at Eastgate in October of 2014.  After three and a half years here, Ray says, “I couldn’t be happier. It’s a beautiful apartment adjacent to the building where Lillian’s room is. And it’s ideal for me with my dog, Sammy. We can just walk right outside from my veranda porch. I looked at several places, all good places. But I preferred Beacon Hill because of the staff and the fact that they could take care of both of us.” As a doctor, he knows “it’s tough to keep a place like this fully staffed with caring, capable people, but they do it. There are some real jewels here…Ann Flynn, Aquanetta, Becky, Mindy, Dawn…”

Words to the Wise

What counsel would he offer to others working with a spouse or relative with memory loss?

“You try to be patient. Patience and caring. Being loving. It’s awful easy to get impatient with somebody. You think, ‘Why can’t you remember? Why can’t you do this? Why can’t you do that?’ They just can’t! What they perceive is their reality. It is what it is. You try and not ask questions or interrogate them to where you make them feel uncomfortable. Lillian’s short-term memory is not good, but she still has some long-term memory. We have a chapel service. She sings the hymns from memory. And when the chaplain has his devotions in the mornings, she’ll finish the scripture verses.” 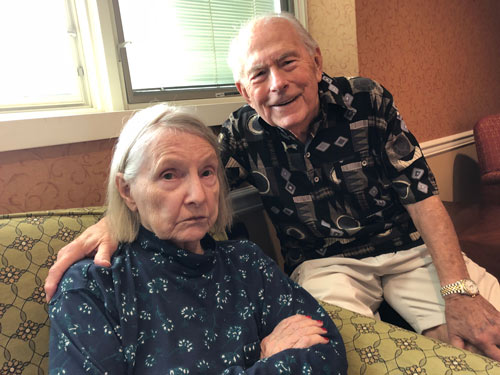 He chokes up talking about caring for Lillian these past few years. “Well, she was always so kind and involved in everyone’s life. I can never, well…I can never repay her for all she has done for me. How fortunate I am. What I do for her is a small thing.”

Ray’s faith has been central to his life—from responding to an altar call at age nine in his home church in Uhrichsville, Ohio, to raising his children, to living out his faith at work and being active in the Christian Medical and Dental Associations.

“I felt I did make a difference in my office and my family,” he says. “I still try to be a role model.” Ray looks forward to a bright future of joy. “My memorial hymn will be ‘I’ll Fly Away.’ It is a celebration! It is an uplifting song. When the body dies, our spirit ascends to God in heaven—the final, best change of residence.” 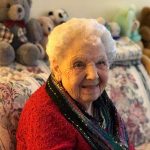 Read: A True Sense of CommunityAssisted 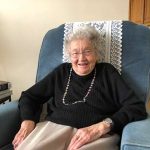