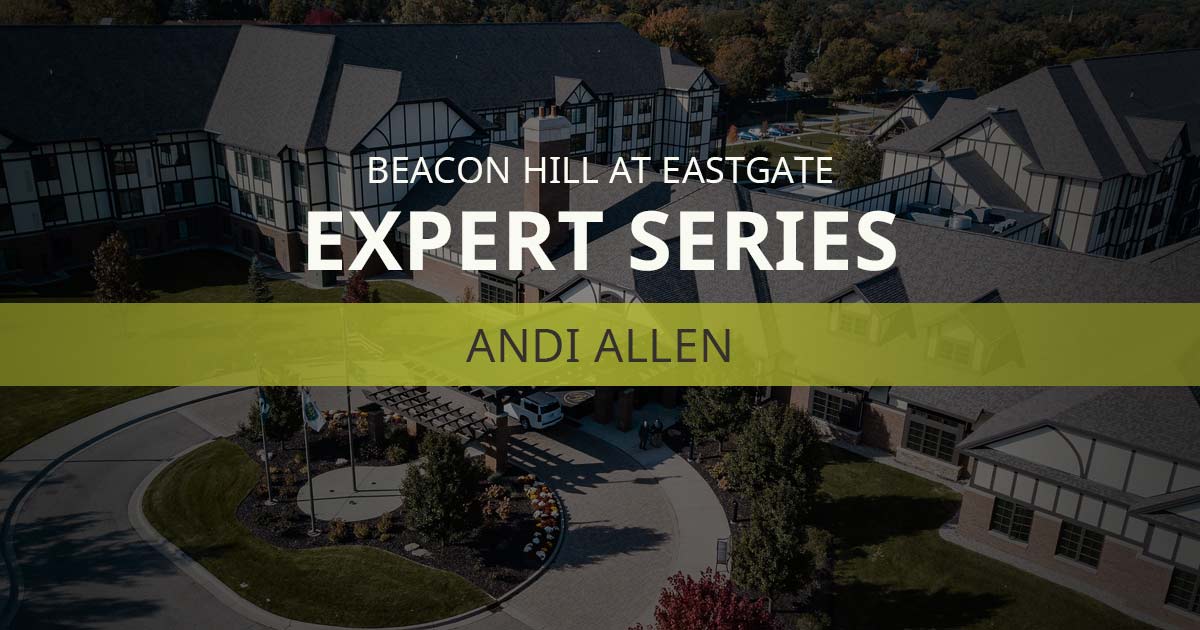 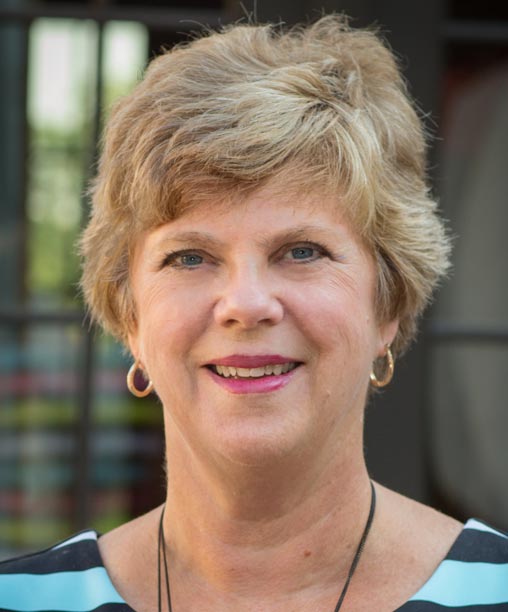 Andi Allen’s ties with Beacon Hill at Eastgate are abundant and enduring. Her grandfather lived here in the 1970s when it was the Michigan Christian Home. In 2016, her mother moved to the C-wing, joining an uncle and aunt who had moved in a few years before. In addition, her husband, Kim Allen, serves on the Beacon Hill Board of Directors. As the Director of the Beacon Hill Foundation, Andi can speak with conviction and authority on the many benefits of living at Beacon Hill as she has experienced it personally, with her own family.

Although Andi did not grow up in West Michigan, her roots are here and after moving to Grand Rapids, she became involved in a number of organizations that resulted in great connections. She held various supportive positions within the East Grand Rapids schools – everything from administering the cultural arts curriculum enhancement program at Wealthy Elementary to taking on the Treasurer’s spot, the Vice Presidency, and then becoming President of the Middle School PTSA.

Her volunteer spirit and contributions did not end there though. She served on the board of the Grand Rapids Symphony Women’s Committee, was involved with fundraising for the Association for the Blind and Visually Impaired and she held various leadership positions at Fifth Reformed Church including an Elder position on the Administrative Board, a Women’s Ministry Program Leader and Capital Campaign Chair for their 2017 building expansion. According to Andi, “I agreed to do that after learning fund development skills at Beacon Hill.” Even more connections.

Andi’s professional work started right after graduating from Northwestern University when she began her 15-year career with IBM in sales and resource management. She remembers “learning the most as a sales manager but my favorite job was an instructor in sales training.” Her career took a pause when she had her three children – within three years – but later Andi re-entered the labor force and switched gears in a dramatic fashion by purchasing a business with her brother — Mr. Handyman — putting her marketing and management skills to use. She joined the Greater Grand Rapids Chamber of Commerce where she continued connecting with others,

A serendipitous result of Andi’s Mr. Handyman business was becoming a Certified Aging-in-Place Specialist, which according to Andi, “helped us market our services to people who were trying NOT to move into a retirement community. But it also gave me a wonderful perspective on how we age and are impacted by things like lighting and the need for physical enhancements such as grab bars and other modifications in the home.”

Andi has been with the Beacon Hill Foundation since 2015 and while this was her first professional post with fund development responsibilities, she brought significant experience with her as evidenced by her multiple volunteer roles. She describes herself as a “communicator,” which makes sense given her college degree was in communication studies, but also a “networker.” Her multiple connections within the community, particularly in East Grand Rapids where she lived and where many Beacon Hill residents hail from as well, has increased awareness of Beacon Hill.

Her involvement within the Foundation has resulted in a number of achievements. The Annual Beacon Hill Golf Outing now fields two full groupings of golfers for both the morning and afternoon and has become an increasingly popular, early summer tradition among links’ enthusiasts. The event celebrates partnerships, community friendships and builds awareness about Beacon Hill’s mission.

She communicates Foundation news and happenings with the colorful, information-packed, semiannual Connections newsletter plus the annual Impact Report which provides a “state of the Foundation” update. The summer monthly “Concerts on the Green” began with Andi and were popular with both Beacon Hill residents and the Eastgate neighbors. Like just about everything, however, the concerts have been abridged and curtailed somewhat due to COVID, but with luck will resume in some form soon.

The guiding principle for the Foundation is “Cultivating Care and Community,” which has born enhancements to Beacon Hill, including the Daverman Wellness Center and the Charles Van Namen Family Bridge and added to a benevolent care fund which provides financial assistance to Beacon Hill residents. Three other areas of opportunity have been developed under Andi’s direction to broaden Beacon Hill’s ability to meet community needs:  The RDW Chaplaincy Fund for spiritual care, Fine Arts funding for program enhancements, and the Employee Scholarship Fund for continuing education.

Beacon Hill is a cherished community presence within the Eastgate community thanks to Andi’s involvement and the support of the Foundation. Beacon Hill’s doors are open for a variety of enrichment opportunities – many of which take place in Community House – where residents and neighbors can hear lectures, enjoy concerts, shop at holiday bazaars and gather with others at various get-togethers. The Foundation also hosts an annual pig roast and participates in annual events such as the Eastgate “Dumpster Day” and “Fall Yard Waste Day.”

Andi was actively involved in launching the Beacon Hill Legacy Society and continues providing vital information on how residents, residents’ families and others can set aside and plan for donations that ensure the continuation of Beacon Hill and the ongoing care we provide for our residents and team members.

When asked what she is most proud of in her position as Foundation Director, Andi said: “I am thrilled to see how it has grown into a fully functioning foundation. We were able to raise awareness and I feel I provided a vehicle for connections and growth. Jeff is a visionary and energizes everyone. It’s fun to work at Beacon Hill and I enjoy the comradery and how well everyone works together.” 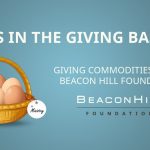 Eggs in the Giving BasketFoundation 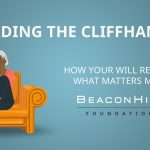